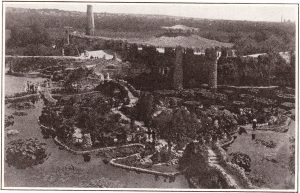 Like other gardens created from abandoned quarries, the Sunken Gardens in San Antonio’s Brackenridge Park is a diamond created from stone. In this case, the quarry was located in the middle of San Antonio not too far from the headwaters of the San Antonio River. This large cavity happened to be located right next to land donated to the city for a major park. When the park was opened to the public in 1901 and the quarry was abandoned in 1908, this presented a challenge.

In 1915, Ray Lambert was appointed as San Antonio’s Parks Commissioner and turned his focus to Brackenridge Park development. He saw the challenge as opportunity with the vision of turning the quarry site into a “sunken gardens” with a zoo, an outdoor theater, and garden with large lily ponds as the centerpiece. In 1917, Park Engineer W. S. Delery created plans that included the lily ponds with a large central island and arched stone bridges connecting the island on two sides.

In July of next year, construction began. Lambert’s Parks Department budget was not enough to see this project through. After winning the support of the group mentioned above, and with the help of prison labor and City employees, by May of 1919 the stone bridges, island, ponds and a large thatched pavilion were completed. The stone for the walls and bridges came mostly from the quarry. Exotic plants came from the city nurseries. The lily bulbs were donated by the Public Service Company.

Although not in the original plan, the public demand for lighting in the ponds and the garden was strong. The Public Service Company again helped by donating the lighting system. Using “invisible wires” strung from insulators on the cliff walls and across the pond, the pools were lit! Some of the insulators can still be seen today. Lights on the island and bridges were set in stone columns with the globes concealed.

When he was finished, Lambert had spent $7000 dollars. City prisoners were taught how to do the sometimes delicate work. City engineers built the bridges in between their regular duties. Not one person was hired outside the City system.

In 1919, Ray Lambert invited local Japanese-American artist Eizo Jingu and his family to live in a house in the gardens (he adopted the name Kimi Jingu to make it easier to pronounce his name). Jingu became a representative for the Japan Tea Association (Shizuoka Tea Association) and in 1926, he opened the “Bamboo Room” and served light food and tea. The gardens became known as the “Japanese Tea Gardens”. The Jingu girls dressed in traditional kimonos and served the food and drink. San Antonio’s warm climate may have been Jingu’s inspiration for the creation of “iced green tea” and “green tea ice cream” that were served here! 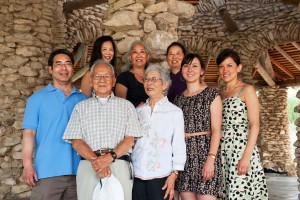 The Jingu’s continued to live in the garden, operating the tea room and developing the garden. Their two daughters, Mary and Ruth were soon joined by the first to be born in the garden, baby sister Rae (named after Commissioner Ray). Then came Helen, Mabel, Lillian, James and Kimi junior.

Mabel tells of the gardener, Mr. Hugo Gerhardt, who tended the garden and the pond in his “huge rubber boots”. Mr Hugo lived in one of the small houses down from the garden. Kimi junior liked to follow Mr. Hugo around and watch him work. Hugo Gerhardt was the gardener for 25 years.

Mabel also describes her father’s design for the tea room. The walls were covered with split bamboo. The ceiling featured four watercolors of the seasons he had painted. These were also framed in bamboo. All of the bamboo was harvested, split and burnished by Jingu. Here, and under the large pavilion, they served tea to San Antonians and tourists that came to the garden, and began selling the tea in beautiful lacquered canisters. One of the popular teas was “matcha”, the powdered green tea used in tea ceremonies.

Commissioner Lambert continued to develop the area. One inspiration came from the time Alamo Cement Company was mining the site. A small village of mostly Mexican American families that worked the cement plant set up shops selling traditional Mexican foods, arts and crafts. This became a popular site for tourists. When the company moved to a new site, the village died. Based on this concept, Commissioner Lambert constructed a new “Mexican Village” in 1920, down hill from the gardens near the site of the original village and revived the popular market.

Kimi Eizo Jingu dies of a heart attack in 1938, leaving Miyoshi and the children to run the gardens. When World War II brought anti-Japanese sentiment, it wasn’t long before Miyoshi and the children were asked to leave the gardens. With short notice, a widow with 7 children had no where to go. She was a member of Travis Park Methodist Church, and received help in locating a suitable rental house near the children’s schools, but they had to leave most of their furnishing behind, including her husbands art.

The gardens were renamed “Chinese Tea Gardens” and a Chinese-American family, Ted and Ester Wu opened a snack bar there. In 1942, a sculpture called the “Chinese Tori Gate” was constructed by the renowned faux-wood artist Dionicio Rodriguez at the entry to the gardens. But in 1984, the gardens were officially renamed “Japanese Tea Gardens”. The sculpture remains as a significant historical artifact.

A move to restore the Japanese Tea Garden came in the 2005 bond election to repair the Pavilion. With help and guidance from San Antonio Parks Foundation and Friends of the Parks, this Phase 1 began. The original roofing was fencing wire with palm leaf thatch, harvested from the city parks, woven together to shed water. The new roof is a fantastic mimic of artificial palm thatch – all the looks without the fire hazard. 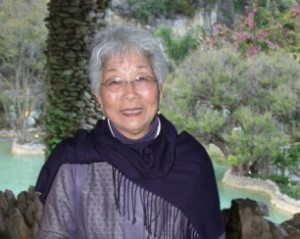 Mabel Jingu Enkoji at the reopening

In 2007, former councilwoman Bonnie Conner, Parks Foundation vice chair of projects, and former Mayor Lila Cockrell, Parks Foundation president, began a $1.6 million restoration campaign to repair the lily ponds. The successful effort resulted in the restoration of the ponds, a new recirculating filtration system, and the return of fish and lilies to the ponds. For the public re-opening on March 8, 2008, Jingu and Lambert family members were present. Mabel Yoshiko Jingu Enkoji, the sixth child of Kimi and Miyoshi Jingu, and born at the Gardens, was the senior Jingu family member at the event. Richard Lambert, grandson of Commissioner Ray Lambert was also present.

A master plan is being created and fundraising will begin soon to continue the effort to return the Japanese Tea Gardens to its former glory as a jewel in the crown of San Antonio and South Texas.

GARDENS IN AMERICA BY KEYWORD

Gardens in the Americas